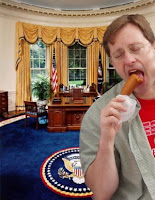 It must be very strange to be President Bush. A man of extraordinary vision and brilliance approaching to genius, he can’t get anyone to notice. He is like a great painter or musician who is ahead of his time, and who unveils one masterpiece after another to a reception that, when not bored, is hostile.

Obama thinks he is a good talker, but he is often undisciplined when he speaks. He needs to understand that as President, his words will be scrutinized and will have impact whether he intends it or not. In this regard, President Bush is an excellent model; Obama should take a lesson from his example. Bush never gets sloppy when he is speaking publicly. He chooses his words with care and precision, which is why his style sometimes seems halting. In the eight years he has been President, it is remarkable how few gaffes or verbal blunders he has committed. If Obama doesn't raise his standards, he will exceed Bush's total before he is inaugurated.

It's starting to creepily be a little like this:

Mr. Chairman: Oh, alright. Well, take a seat, make yourself comfortable, sit anywhere. We're just getting ready to move on to our next ordr of business, but anything else?

Mr. Chairman: Well, okay, but before we vote, I'd like Doug to explain why he wants to kill Brocktoon!

Doug: Uh.. I want to meet this girl, and, uh.. I know that she'd be, you know, pretty impressed if she knew I hung out with Mr. Belvedere.

Mr. Chairman: Well, why kill him, then?!

Doug: Um.. because.. so he wouldn't know how unworthy I am to hang out with him..?

Yes a man of "care and precision"

Go to Sadly, No for extra guffaws.