Five years of this shit. Look at it. It's our doing. 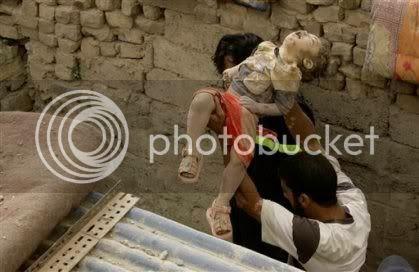 Two-year-old Ali Hussein is pulled from the rubble of his family's home in the Shiite stronghold of Sadr City in Baghdad, Iraq on Tuesday, April 29, 2008. The child, who later died at the hospital, was in one of four homes destroyed by U.S. missiles. More than two dozen people were killed when Shiite militants ambushed a U.S. patrol in Baghdad's embattled Sadr City district, bringing the death toll in area on Tuesday to more than 30, a U.S. military spokesman and Iraqi officials said. (AP Photo/Karim Kadim)