I, for one, welcome our giant bony fish overlords 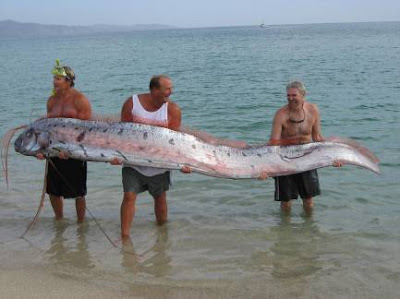 The giant oarfish, also known as “the king of herrings” (Regalecus glesne), is the world’s largest bony fish (“teleost”), and can grow up to 11 meters (36 feet) long! It’s rarely photographed because it lives in the deep sea, but one just washed up on the coast of Sweden, where it hasn’t been seen for 150 years. They eat plankton.

Here's older video of one that in its death throes washed up in California -- you can now sort of understand where sea serpent stories come from (and maybe the Loch Ness Monster).

To paraphrase the incomparable Lily Von Shtupp in Blazing Saddles: "Is this herring a Bismarck battleship?"

Speaking of undersea astonishment, there is a segment in this video where an octopus camouflages himself against some seaweed. It was a total "Holy crap!" moment for me.

Hmmm guess it would help if i provided the link: http://www.ted.com/talks/david_gallo_shows_underwater_astonishments.html

lordy if asians think it will give them a long boner.