Meet the new holdouts...same as the old holdouts

One could say it is strange or funny that the same states holding out against marriage equality are the ones that generally hold the country back in general.

Except it is neither funny nor at all surprising. 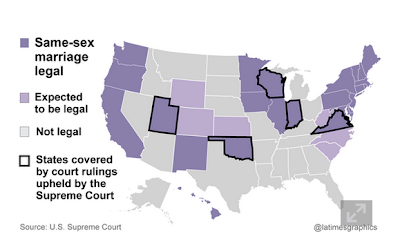 I am willing to bet that these same states would conversely lead polling in thinking there's a link between Ebola and Benghazi -- after all, they both originated in Africa..."just like Obama".


Prescription for the great states of Utah, Oklahoma, and Indiana (O Indiana!):

Dr. Pillow recommends liquid ibuprofen or acetaminophen to relieve esophageal discomfort, and a soup and liquid diet until the bruising subsides.

Oh yeah, the important part: Deal with it and grow.

You can add Idaho, Nevada, and Montana to the now legal list, as the 9th Circuit just overturned prohibitions in Nevada and Utah.

Ooops! Maybe not afterall. Justice Kennedy has issued a stay in the Idaho case.

Missouri might be open to some sort of compromise.