We know somebody that can "help" you...

Great Britain, the country with three major political parties, all to the left of our Democrats, held its election yesterday. In some respects it was business as usual.

Everyone got excited that this might be the year the Liberal Democrats (who are mildly liberal and very dysfunctional -- like our Democrats) did something at the polls. But as usual, it was all a tease and they've managed to barely increase their vote and not increase their seats.

Gordon Brown, who combines the charisma of Dukakis and the glower of Nixon into one unpopular package led a Labour Party that had exhausted itself after 16 years of governing to an abysmal performance of just over a quarter of the vote.

And the Tories, led by longtime aspirant David Cameron, who conservative papers laughably tried to turn into a "Hope" poster, gained votes, mostly because Labour lost them, but have come up well-short of what is needed for a majority.

So nobody really wins -- a hung Parliament.

This looks like a job for Nino Scalia! As Wayne Rooney is unavailable, Great Britain, meet your new Prime Minister. 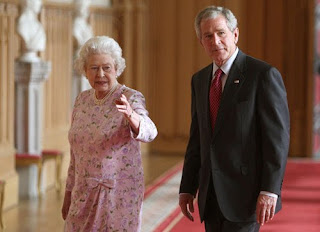 Jolly good showing by the Plaid Cymru MP in the background. His tenure at the Ministry of Silly Walks will come in handy this year.

Ah, well, after nearly two decades of trying to imitate the Tories, New Labour is out, UK voters having decided that NL was pretty good at destroying the country, but not quite as good at it as the Tories, and hoped to bring back the old days with an hermaphroditic amalgam of Margaret Thatcher and John Major.

Adam Curtis, in one segment of a recent documentary of his, makes some fascinating comparisons between New Labour/Blair and the DLC/Clinton and RNC/Bush methodologies and finds that they're virtually the same, because they were employing similar polling/focus group methods, and in some instances, trading campaign advisors. New Labour, for example, pushed a program very much like NCLB which had almost identically bad results as here (i.e., it had the effect of making poorer schools worse off).

It's quite possible that this right-wing mantra that government has to be run like a business, and that much of government must be privatized (which Bush and the Republicans, New Labour and Blair and the DLC have embraced), has now infected so much of the political establishment that governments run by those methods simply no longer function properly.

Might take a few more election cycles for voters here--and in the UK--to figure that out.

imbecile? who had a whole street behind him in a shot?
that was pretty benign for silly walks. and quiet. not drunk.

hopefully if it is georgee, he will be thrown out toot sweet, unlike our chimp.