Bring it On II: Electric Boogaloo 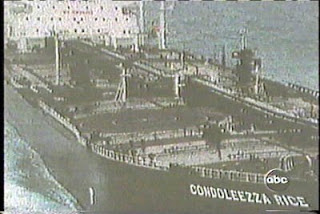 “I know he’s sitting in Iran,” Rice said dismissively, when asked about al-Sadr’s latest threat to lift a self-imposed cease-fire with government and U.S. forces. “I guess it’s all-out war for anybody but him,” Rice said. “I guess that’s the message; his followers can go [to] their deaths and he’s in Iran.”

So Sadr is a coward for making threats from Iran… and Condoleezza Rice is a stateswoman for blustering Sadr into making a move that carries the potential of killing American soldiers. Why is this woman respected again?

I supposed a gin-up Iraqi conflict pitting Al Sadr against American forces will manage to kill just enough American soldiers to get people to vote for McCain.

Yeah, sounds morally bankrupt and criminal...so that must be the plan for the Bush Administration.
Posted by Attaturk at 3:01 AM

Generic Viagra (sildenafil citrate; brand names include: Aphrodil / Edegra / Erasmo / Penegra / Revatio / Supra / Zwagra) is an effective treatment for erectile dysfunction regardless of the cause or duration of the problem or the age of the patient.
Sildenafil Citrate is the active ingredient used to treat erectile dysfunction (impotence) in men. It can help men who have erectile dysfunction get and sustain an erection when they are sexually excited.
Generic Viagra is manufactured in accordance with World Health Organization standards and guidelines (WHO-GMP). Also you can find on our sites.
Generic [url=http://viagra.wilantion.ru]Viagra 100mg pills[/url] is made with thorough reverse engineering for the sildenafil citrate molecule - a totally different process of making sildenafil and its reaction. That is why it takes effect in 15 minutes compared to other drugs which take 30-40 minutes to take effect.
[b]Buy Viagra Online
Viagra Not Working Anymore
viagra dependence
Viagra Generic
Viagra Animal Testing
viagra affiliates
Viagra 10 Mg
[/b]
Even in the most sexually liberated and self-satisfied of nations, many people still yearn to burn more, to feel ready for bedding no matter what the clock says and to desire their partner of 23 years as much as they did when their love was brand new.
The market is saturated with books on how to revive a flagging libido or spice up monotonous sex, and sex therapists say “lack of desire” is one of the most common complaints they hear from patients, particularly women.