Not that Charlie Gibson cares 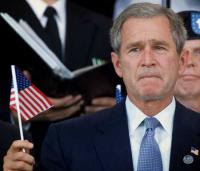 But, do they wear flag pins?

WASHINGTON (AP) — Some 300,000 U.S. troops are suffering from major depression or post traumatic stress from serving in the wars in Iraq and Afghanistan, and 320,000 received brain injuries, a new study estimates.

Only about half have sought treatment, said the study released Thursday by the RAND Corporation.

"There is a major health crisis facing those men and women who have served our nation in Iraq and Afghanistan," said Terri Tanielian, the project's co-leader and a researcher at the nonprofit RAND.

"Unless they receive appropriate and effective care for these mental health conditions, there will be long-term consequences for them and for the nation," she said in an interview with The Associated Press.

Ah, who cares about this stuff, take it from Media Love Interest John McCain, starting these wars and their effects are just academic questions.

So fuck all you eggheads.
Posted by Attaturk at 11:12 AM