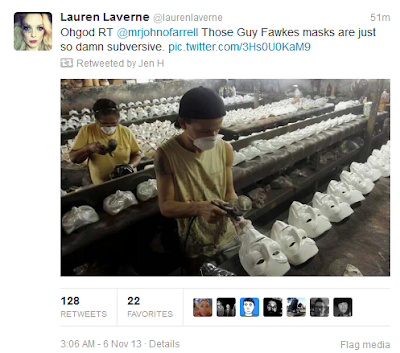 Tweeted Lauren Laverne from her mass-produced iPhone 5s, which is cool 'cause it's so damn expensive.

I am constantly boggled at the whole "Guy Fawkes mask" thing. If Alan Moore had been an American and had set V for Vendetta in America, it would have been a John Wilkes Booth mask. The point wasn't that V stood for FREEDOM or mild anti-government sentiment or even anarchy - the point was that V stood for TERROR. He was terrorizing the members of the ruling class for what they did to him. And he wanted to make them feel afraid. Hence the Guy Fawkes mask.

don't let the workers know what they are making,