Maybe it won't fizzle out into a giant dud.


A one in a lifetime galactic fireworks display appears to have begun after astronomers confirmed that Comet Ison, dubbed the “comet of the century”, has entered the Earth’s orbit. The comet has dramatically brightened with an outburst of gases in recent days as it draws ever closer to the sun, the Times reported, and if it survives it could be the greatest celestial display in more the 300 years. It is now visible to the naked eye and is expected to continue brightening over the next few weeks until it outshines the moon.

Well, we'll see about that last part...but if you live out in the country you can probably see it in the early morning near Mercury...so aim for 4 a.m. or so. 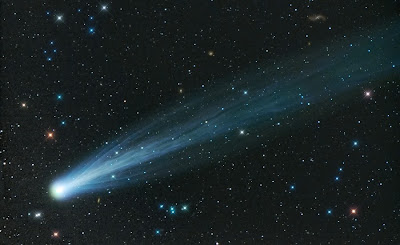 Four in the morning -- right in the walking man's wheelhouse.

This time for sure.

No one has told Pat Roberston, amiright? 'Cuz he'll shit his pants if this comes to pass.

The comet will be in the southeastern sky. I don't know where Pat Robertson will be.

maybe the republican dimwits can filibuster the comet...