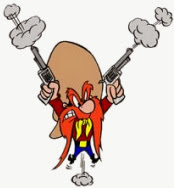 According to television station WXII, an employee at a Wilkesboro, N.C. store was talking about guns and the Second Amendment with a customer on Tuesday night. The customer pulled out his handgun, which "accidentally discharged and the shot went through a printer," according to the employee's account to police. The customer fled the store after firing the shot. Police are looking for the male suspect, who is looking at a charge of discharging a firearm within city limits, according to WXII.

"fled the store after firing the shot..."

North Carolina...hmmm...wonder where Bob Owens was that night...

Why did he run? was he afraid he might be held accountable for his gun-totin' constitutionalism?

Maybe if enough of these yahoos shoot their dicks off, they won't be able to procreate.

where was darwin when he was needed.

Services for the LaserJet will be held on Saturday.

What happened to that printer was a clear case of peripheral damage.

There are no Accidental Discharges only Negligent ones.

If he'd accidentally shot a human everybody would have raised their hands to the sky and wailed in lament and anguish, asking why oh why?

But, he shot a printer. There was property destruction. This was serious. Someone was going to demand justice.

Educated guess says there was no customer.