Let me see if I have this correct. We are telling North Korea that we want them to talk with us or more correctly intermediaries who may or may not share our world concerns or we will "have to do something." We want to talk one minute then we constantly remind everyone that "all options are on the table." Strange table. Strange policy.

What is it that the Bush administration wants? North Korea to focus on its nuclear ambitions because that is the only card they have to play at the World Poker Tournament of foreign policy. Yeah, threats always work so well on the world stage when you are dealing with an isolated, xenophobic, militaristic, starving new nuclear power. Sounds good, doesn't it? "We don't want you to sell any nukes to anyone so we tell you to talk damn it, or we will do something. Something you will not like. Got it punk?!"

Brilliant. Brinkmanship gone wild. Could it get any worse?

Then I remind myself that Condi Rice is the new secretary of state. Oh shit, it can get worse. Someone who defends Bush misadministration policy even if she doesn't know what it is and is willing to use irresponsible scare tactics to pull a fast one on the American public. Mushroom cloud anyone?

Maybe Condi is crazy? Could be that she is trying to construct a coherent foreign policy from president I-like-to-blow-stuff-up. I wonder if she is really willing to do the necessary give and take of a sound foreign policy? Then I read in today's NYT that Condi is making a big deal about going to church in China. 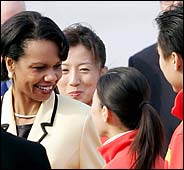 Now, what would these people do if they are faced with a real crisis? Threaten to push the button. "Halleujah the bombs are flying." Given the actions of this group of thugs, would any of us really be surprised?
Posted by DeDurkheim at 8:12 AM