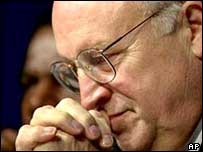 President Bush has nominated the vice president's son-in-law, Philip J. Perry, as general counsel of the Homeland Security Department, where he would oversee 1,500 lawyers who work on legal matters like Coast Guard maritime laws and immigration.

Mr. Perry, who is married to Elizabeth Cheney, is leaving the Washington office of the Latham & Watkins law firm, where he was a partner, as well as a lobbyist for Lockheed Martin, one of the top 10 contractors for the Homeland Security Department.

If confirmed, Mr. Perry will not be the only member of Mr. Cheney's family working for the administration. Elizabeth Cheney, the vice president's daughter and Mr. Perry's wife, was appointed last month by Secretary of State Condoleezza Rice as the second-ranking United States diplomat for the Mideast.

You have to admit, he certainly photographs like an "original" Cheney.

No word on when Jenna or Not-Jenna will be appointed to head the Bureau of Alchohol, Tobacco and Firearms.
Posted by Attaturk at 5:40 AM