I read the New York Times piece on how the thrice-married middle-aged Republican like Newt Gingrich suddenly converted to become a Roman Catholic.


“As he got involved with the history, it blew his mind. There was just so much of it and I don’t think he had understood that before, that he really had a sense of the intellectual tradition behind it.”

Given his own history, and his self-proclaimed love of history I think I can imagine just what history Newt is inspired by:


Probably around January 897, Stephen VI ordered that the corpse of his predecessor Formosus be removed from its tomb and brought to the papal court for judgement. With the corpse propped up on a throne, a deacon was appointed to answer for the deceased pontiff. Formosus was accused of transmigrating sees in violation of canon law, of perjury, and of serving as a bishop while actually a layman. Eventually, the corpse was found guilty. 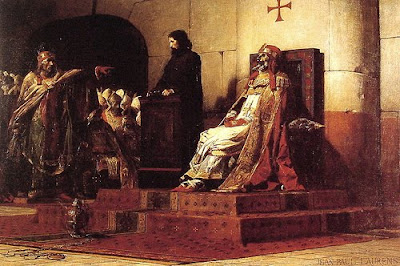 That's the kind of intellectual tradition Newt Gingrich can get behind.

I'm guessing Newt has a dream of sending backhoes to Hyde Park for FDR.

Two great tastes that taste great together. Newt is the perfect match for what Mother Church has become.

Any indication if the corpse confessed and repented so that it could be strangled* before being placed on the pyre and burned to death?

*the traditional act of mercy for penitents.

I think Charles P. Pierce borrowed your funny and filed off the serial numbers on this post:

"Ross Douthat now stands as the Pope Stephen VII of letters, digging up the recently deceased and putting his corpse on trial in Douthat's own, Colorforms version of the Cadaver Synod. I guess we can be grateful that Douthat only gums away futilely at his argument. Stephen threw the convicted remains of Pope Formosus into the Tiber. Douthat just tosses Christopher Hitchens's corpse into the shallow end of his intellect."

A h/t would have been nice.