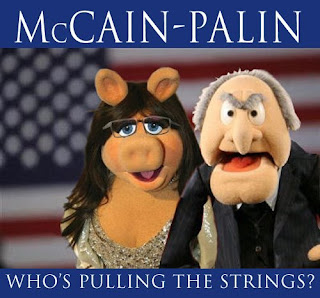 "The fundamentals of our economy are strong," John McCain said as Wall Street went into white-knuckle panic over diving investor confidence. Does he believe that? It doesn't really matter, because the Republican has outsourced his economic policy to the ideologues whose opposition to regulations brought the financial markets to their knees.

McCain's former economic adviser is ex-Texas Sen. Phil Gramm. On Dec. 15, 2000, hours before Congress was to leave for Christmas recess, Gramm had a 262-page amendment slipped into the appropriations bill. It forbade federal agencies to regulate the financial derivatives that greased the skids for passing along risky mortgage-backed securities to investors.

And that, my friends, is why everything's falling apart. That is why the taxpayers are now on the hook for the follies of Fannie Mae, Freddie Mac, Bear Stearns and now the insurance giant AIG to the tune of $85 billion.

On Monday, McCain issued a tough-talk statement that he was "glad" that the feds "have said no to using taxpayer money to bail out Lehman Brothers, a position I have spoken about throughout this campaign." On Tuesday, the government did the daddy of all bailouts. It took over AIG, fearing its bankruptcy could set off a cataclysmic chain of events.

And do you know where the problems lay at AIG? They weren't in its main insurance business. They were in its derivatives-trading unit.

Last February, Fortune Magazine called Gramm "McCain's Econ Brain." Gramm lost the official title of economic adviser for making an impolitic remark about this being "a nation of whiners." But Gramm's belief in letting speculators do as they please was never an issue. And even after he left the campaign, Gramm had been mentioned as a possible treasury secretary in a McCain administration.