What a bunch of Tuckers! 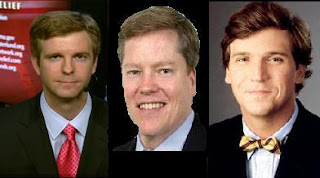 The debate on Friday was to focus on Mr. McCain’s perceived strength, foreign policy. Mr. McCain had not planned to devote large blocks of time to debate practice as did Mr. Obama, who was holing up with a tight circle of advisers at a hotel in Clearwater, Fla., on Wednesday, Thursday and Friday to prepare. Mr. McCain had a preparatory session on Wednesday afternoon at the Morgan Library in Manhattan, but advisers said it had been interrupted by his decision, announced immediately afterward, to suspend his campaign.

McCain: "I don't wanna do this anymore, let's come up with an excuse. Get to work on an excuse, one of you various and sundry Tuckers, I employ!"

Now this information was clearly leaked by either a disgruntled Tucker or a weaselly Tucker playing the expectations game. There are so many Tuckers it is hard to truly know.

Meanwhile, another random Tucker is weaseling to try to get Sarah Palin out of a debate, having accomplished the dubious feat of being outwitted by Charlie Gibson and Katie Couric. "Unprepared, non-vetted, patronized, shallow ideologues rock!"