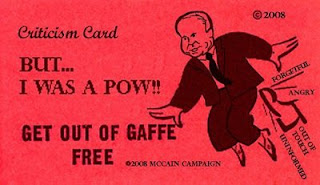 By midafternoon, both campaigns were in full battle cry and sought to portray the other candidate as living an ostentatious lifestyle. Both campaigns called reporters, rushed out scathing TV attack ads, unveiled new websites and unleashed surrogates.

McCain, who huddled with advisors at his desert compound in Sedona, Ariz., said nothing in public. A nine-car motorcade took him to a nearby Starbucks early in the morning, where he ordered a large cappuccino. McCain otherwise avoided reporters.

Forced into damage-control mode, his campaign aides counterattacked to reinforce their claim that Obama is an elitist.

Is it too elitist to send one of his staff, or his $270,000 worth of servants to go get him a goddamned large cappaccino?

John McCain the "evironmentalist" and "non-elitist" taking 9 cars to Starbucks.

(picture from here)
Posted by Attaturk at 8:54 AM