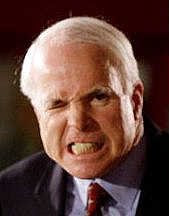 "I am always reluctant to talk about my POW experience...make sure you quote me on that again"

As always, let me give the obligatory I'm sure it must have been hell and it's compelling. It also ended more than 35 years ago. Don Rumsfeld had been the Secretary of Defense at that time, it certainly didn't make him a good one all these years later. And that's literally one-to-one experience not tangential experience.

Nothing becomes a "hero" more than reluctance to be called one. McCain has managed to sell this theme, but he hardly lives it.

Whenever he gets called out or accused of being less than forthright this comes out via his press flack:

“The insinuation from the Obama campaign that John McCain, a former prisoner of war, cheated is outrageous”

Well, that's a fine line of logic isn't it?

But it is all part of a pattern.

When called out for a factual error in something so trivial, yet memorable as using dominant pro football teams of an era to patronize he uses the POW card.

He uses the POW Card to push his Cuba policy.

He uses the POW Card to get a forty year old dig in at hippies.

He has used the POW card to say he isn't a racist, evidence to the contrary notwithstanding.

He has used the POW card to excuse years of voting against issues supporting veterans.

He just used the POW experience again to apparently plagiarize Solzhenitsyn (classy, the guy just died). But then again, how dare I accuse John McCain of this, he was a war hero.

Only Democrats with three purple hearts, a bronze star and a silver star, and who actually had to kill a man in direct, personal, combat are worthy of being called deceitful or wimps.

And the most shallow of McCain surrogatoes on cable (and is there any other kind?) even excuse cheating on your wife through the POW experience.

When will the press notice?

If you accuse me of naivete I remind you I was sent to my room as a child. On more than one occasion. So really, how dare you!