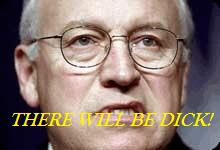 No, not the greatest lubricant name ever -- but one of the worst human beings bestriding the 50-states:

A two-year-old letter by Vice President Dick Cheney that pushed a controversial Alaska natural-gas pipeline bill is getting renewed scrutiny because of recently disclosed evidence in the Justice Department's corruption case against Sen. Ted Stevens. In a conversation secretly tape-recorded by the FBI on June 25, 2006, Stevens discussed ways to get a pipeline bill through the Alaska Legislature with Bill Allen, an oil-services executive accused of providing the senator with about $250,000 in undisclosed financial benefits. According to a Justice motion, Stevens told Allen, "I'm gonna try to see if I can get some bigwigs from back here and say, 'Look … you gotta get this done'." Two days later, Cheney wrote a letter to the Alaska Legislature urging members to "promptly enact" a bill to build the pipeline. The letter was considered unusual because the White House rarely contacts state lawmakers about pending legislative matters. It also angered state Democrats, who accused Cheney of pushing oil-company interests. The former executive director of Cheney's energy task force had gone to work as a lobbyist for British Petroleum, one of three firms slated to build the pipeline.

What a total non-surprise. Best crawl into that man-safe Dick.
Posted by Attaturk at 9:14 AM