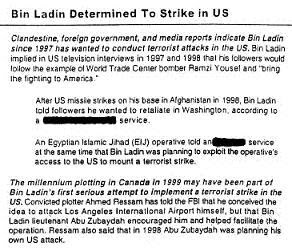 August 6th will be the 63rd anniversary of the bombing of Hiroshima. A tragic day full of moral complexities about the decisions and events that led to that fateful day. Its circumstances and consequences still the subject of worthy debate.

And then we have the world that we have had presented to us today.

Which leads us to the more immediately relevant fact that it will also be the 7th Anniversary of the PDB George W. Bush got the notice, "Bin Laden Determined to Strike U.S.". Which elicited this retort, one which will truly live in infamy:

So it is only fitting as we approach the anniversary of the moment that condenses the entirety of two terms of George Bush into one sentence that the Rand Corporation - in a report paid for by the government states this:

The United States can defeat al-Qaida if it relies less on force and more on policing and intelligence to root out the terror group's leaders, a new study contends...Its report said that the use of military force by the United States or other countries should be reserved for quelling large, well-armed and well-organized insurgencies, and that American officials should stop using the term "war on terror" and replace it with "counterterrorism."

"Terrorists should be perceived and described as criminals, not holy warriors, and our analysis suggests there is no battlefield solution to terrorism," said Seth Jones, the lead author of the study and a Rand political scientist.

"The United States has the necessary instruments to defeat al-Qaida, it just needs to shift its strategy," Jones said.

Ah yes, in other words, we dirty effing hippies were RIGHT AGAIN!

Of course, this is exactly what John Kerry advocated and what he was pilloried for -- because our media wet their pants and is too lazy to ever consider nuance and smart policies (and apparently this will never end, look no further than today's Richard Cohen column and then consider that wanker's various pronouncements on the psychological benefits of bombing until the rubble bounces over the years). No, the world must be the black and white variety as envisioned by George Bush and John McCain, where blowin' shit up is the most awesome thing ever!

And when it doesn't work ... why just blow 'em up some more.


[cross-posted at Firedoglake]
Posted by Attaturk at 7:00 AM