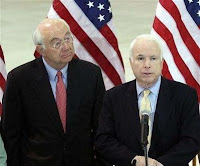 WE MUST DEREGULATE BANKS!

YAY, We've Deregulated Banks and we're exploiting the masses to become richer than ever!

Look at how awesome De-Regulating the banks has been, you people criticizing it are engaging in class warfare! All these bankruptcies are abusive of us rich people, we need to make those laws tougher...WE NEED TO REGULATE THE MASSES!

Nothing is wrong except the masses are suckers, don't blame us. We're rich. They need to pay off their loans. Good thing we made bankruptcy so hard for 'em.

GODDAMN, WE'RE IN TROUBLE, WE NEED THE MASSES TO BAIL US RICH FOLKS OUT OR WE'RE TAKING ALL OF YOU BASTARDS WITH US!!!!!!!!!!

WHY DID YOU LISTEN TO US THE FIRST TIME?
Posted by Attaturk at 5:36 AM