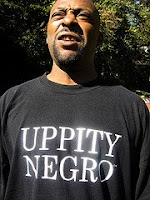 One thing that comes with a six-figure (minimum) salary for punditry is a complete lack of creativity.

Yes, the MEME must be renewed, revisited, restated, regurgitated.

From Bill Kristol, to Ron Fournier, to Chuckles Krauthammer the theme must be laid down.

The black man is arrogant!

Americans are beginning to notice Obama's elevated opinion of himself. There's nothing new about narcissism in politics. Every senator looks in the mirror and sees a president. Nonetheless, has there ever been a presidential nominee with a wider gap between his estimation of himself and the sum total of his lifetime achievements?

You can scan Krauthammer's column today and note the complete lack of evidence for the charge of arrogance...beyond Krauthammer's dubious say-so.

But then that's close enough for horseshoes and Republicans bombing a country isn't it?

Krauthammer is just following in the wake of...

But both Obama and his wife, Michelle, ooze a sense of entitlement.

And your evidence for this is what, your fabulous middle-aged white guy spidy-sense?

And then there's Bill Kristol who entitled a column in February saying about Obama's candidacy:

It's all about him

Which, I guess explains why his name is on the posters. Shocking I know.

Yes, Conservatives have discovered, somehow, that running for President takes a great deal of self-confidence. But apparently there's absolutely no sense of entitlement or arrogance about John McCain; from telling a kid to "shut up" to making those H-I-L-A-R-I-O-U-S violent rape jokes with the press boys in the back of the Straight-Talk bus that they laugh at so. He's just McCain bein' McCain ... nothing overly self-involved there at all, right?

And they are not alone. The list can be made quite a bit longer of columnists pushing this theme without evidence. Obama is "arrogant" just because they say so.

God forbid a black man be ambitious and yet not be using that ambition in the cause of singin' and dancin' up there on a stage.

Oh, how the right whines (right Phil Gramm?) whenever we DFH's make this complaint. We're playing the race care they shriek.

What evidence is there that he is even as close to arrogant as Charles Krauthammer, Bill Kristol or George Will?

Oh, if only Obama had been "shiftless" like a black man is supposed to be, right Chuck?

[Cross-Posted at Firedoglake because I really am shiftless]