ROBERTS: So it’s clear you have no regrets in saying that the U.S. could be in Iraq for a hundred years.

MCCAIN: The U.S. could have a military presence anywhere in the world for a long period of time.

"Country First" adorns the masthead of McCain's website -- and he's produced commercials with that theme as well.

So, like commenter Stony Pillow, I have to wonder...

In a conversation with the Tribune, McCain said he has spoken to the Georgian president every day.

Which country it is...

The situation in Georgia remains fluid and dangerous. As soon as possible my colleagues senators Lieberman and Graham will be traveling to Georgia.

We know which country did not come first in August 2005: 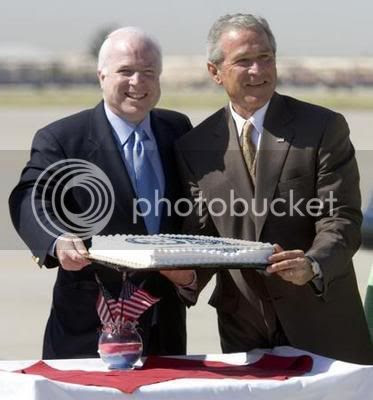 Cross-Posted at Firedoglake.
Posted by Attaturk at 7:00 AM