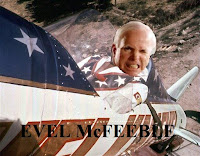 John McCain in an increasingly rare interview when he and his running mate (fka "my soul mate") were not staring daggers at each other:

You’ll have to tell me what’s changed. I love it when they say, “Oh McCain has changed.” And I say, “What have I changed on?” They can’t name a single issue or they’ll name an issue and its false.

Well, you didn't actually become a Democrat because you change back in about a day and a half.

Oh yeah, and for wanting to roll back the same tax cuts for the wealthy that McCain opposed in 2001, McCain calls Obama a socialist. Heavens to Eugene Debs!

And, of course, that's not all he's "Changed" position on with his ticket of Mavericks.

And now, his former "soul mate" has stated one more position John McCain will change on to keep the nations dachshund abusers on board. If a woman is raped, well she'll be forced to bring any result of that act to term because God loves her.

[cross-posted at Firedoglake]
Posted by Attaturk at 4:00 AM