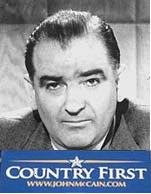 A slander so vile even Fred Hiatt calls McCain an "idiot":

To suggest, as Mr. McCain has, that there is something reprehensible about associating with Mr. Khalidi is itself condemnable -- especially during a campaign in which Arab ancestry has been the subject of insults. To further argue that the Times, which obtained the tape from a source in exchange for a promise not to publicly release it, is trying to hide something is simply ludicrous, as Mr. McCain surely knows.

Which reminds us: We did ask Mr. Khalidi whether he wanted to respond to the campaign charges against him. He answered, via e-mail, that "I will stick to my policy of letting this idiot wind blow over." That's good advice for anyone still listening to the McCain campaign's increasingly reckless ad hominem attacks. Sadly, that wind is likely to keep blowing for four more days.

John McCain is not a man very comfortable in his own skin. His self-proclaimed "honorableness" has been exposed as an epic fail on the grandest of scales. He has become a joke, letting the worst of right-wing bloggers steer a course from stupidity to vile.

And he can suck.on.that. for the rest of his days.

[cross-posted at Firedoglake]
Posted by Attaturk at 3:24 AM