Another person Will Rogers never met

Chuck Grassley, who thinks like he twitters, is now pretending to be mad because apparently the Obama Administration long-ago (?) figured out his little game on pretending to negotiate:

“I’ll tell you, there’s some things that the president has said since then that I took very personally,” Grassley said. “He gave some speeches during August in which he was associating me with efforts to make this a political document.”

Well, golly Corn-pone Socrates why would he do that? Oh right... you sent this out in early August: 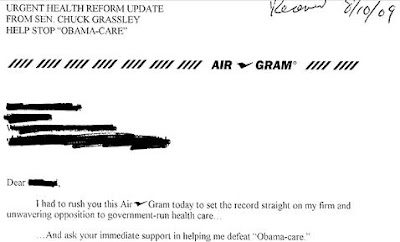