This explains both the incredible stupidity of the teabaggers who never lifted a goddamned thing other than a No. 2 pencil to vote for Bush along with why certain groups are proportionately amongst their makeup. 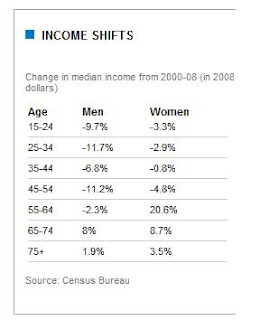 The incomes of the young and middle-aged — especially men — have fallen off a cliff since 2000, leaving many age groups poorer than they were even in the 1970s, a USA TODAY analysis of new Census data found.

People 54 or younger are losing ground financially at an unprecedented rate in this recession, widening a gap between young and old that had been expanding for years.

Eight years of screwing the middle class. But hey, at least the cost of health-care and a college-education sky-rocketed -- and we got two unending wars out of the deal, so you have that.

I believe back when they were young men, these gentlemen covered it best: