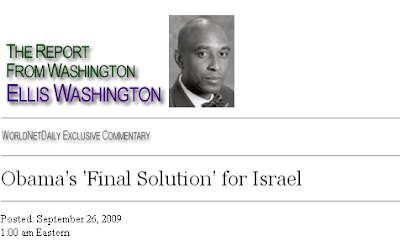 How can Bolton and Netanyahu, two seemingly rational, educated and intellectual men hear President Obama's U.N. speech Wednesday and come to such diametrical opposite conclusions? Both men proudly claim that they are conservatives; both men claim that they believe in a strong, independent, defensible Israel with an indivisible capital at Jerusalem. Answer: One man is a statesman like Sir Winston Churchill; the other is a politician, an appeaser like Neville Chamberlain.

That's right, they are accusing Netanyahu of being Neville Chamberlain AND John Bolton of being like Winston Churchill.

When Obama says, "… and a viable, independent Palestinian state with contiguous territory that ends the occupation that began in 1967 and realizes the potential of the Palestinian people," he is using perhaps the most evil, anti-Semitic language I've ever heard from any American president against Israel.

But when Nixon, Carter, Reagan, Bush I, Clinton, and Bush II said the same thing, it was AWESOME!

And just how insane is Ellis Washington? Why this insane: