Unlike many spree killers 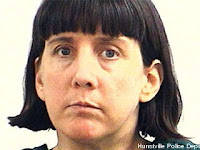 The Biology Professor who killed three colleagues was not somebody you can look at -- if you knew her history -- and say, her actions were shocking.

I wrote earlier shooting your brother can fuck you up, but it sure looks like the being fucked up part came before that incident took place. And unlike some conservatives this isn't like Huckabee's pardon of a serial rapists, but it is an indication that even a locally powerful person in the right location (her mother) can really throw a monkey-wrench into the judicial system (and speaking of being fucked up, imagine what this prior incident [daughter shooting son] did to that woman's psyche).

Of course, in between killing sprees she gets a Ph.D in biology from Harvard and joins academia -- no small accomplishment [and judging by her haircut toured with Emo Phillips, hell she might be Emo Phillips].

Just the weirdest CV ever I suppose. In fact, this sounds more like a bizarre Hitchcock movie ripped off by Brian DePalma.
Posted by Attaturk at 8:22 AM