What the Village Scribes have taught me...

I don't claim special insight into the human condition, but I think I am somewhat informed. But I admit I did learn something new from Politico yesterday.

In an article entitled "High-profile Catholic Dems bail on Obama on contraceptives" comes this quote:

So Orthodox Jews, are they part of the Franciscans, Dominicans, Benedictines, Carmelites, or some new branch of Catholicism?

The other notable aspect of the article is its slavish devotion only to the words of D.C. insiders exclusively -- while simultaneously having this graphic at the top of the article -- which is never, ever, discussed. 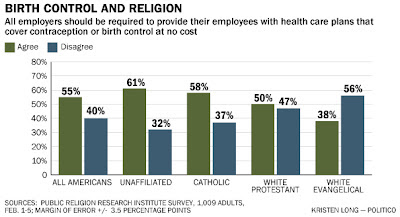 It is truly the ultimate Politico article...ignoring the truth before its eyes to create a narrative of insider fiction.

Graphs are fun. They make a report dazzle and shine. That the graphs have anything to do with the report (or even contradict the report) is immaterial. You see we humans like shiny things and nothing shines up a dull paper like a few well colored graphs.

"makes me wanna holler, throw my hands in the air..."