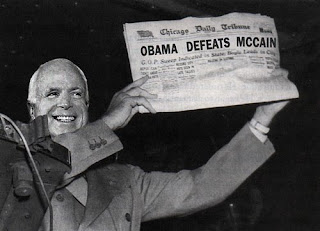 Today is election day in New Jersey and Virginia and OMG, it must mean something it just must!

Surely should elections in those two states go to Republicans it means Glenn Beck can fire up his awesome time-travel enabled magic underwear to transport himself back to November 2008 and invalidate the last Presidential election.

For bending reality is the specialty of FoxNews, even candidates endorsing a Democrat get manufactured into endorsements of the extra-right-wing right-winger. Whatever happens, I'm sure it will be construed as good news for Republicans in 2010.

After all, just look at the 2007 elections which saw the Republicans take back the Louisiana Governor's mansion, right Chris Cillizza?

Louisiana: Is Jindal's Win a Sign of GOP Turnaround Nationally?

Rep. Bobby Jindal's outright victory in yesterday's Louisiana gubernatorial primary was the first piece of good electoral news for the Republican Party in months, prompting talk that the GOP is rebounding from the 2006 debacle.

And it all ended up working out so well for President McCain, Speaker Boehner and Majority Leader McConnell in 2008.

[Cross-Posted at Firedoglake]
Posted by Attaturk at 3:34 AM