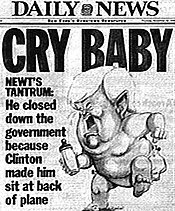 Apparently, Newtie gave the commencement address yesterday at Liberty "University," wherein he assailed a "growing culture of radical secularism." Like TPM's Steve Benen, I don't know what he's talking about, but I guess Newtie thinks discrimination against believers is as common as a GOP presidential candidate whose dumped a starter wife (or two). So I'm sure that if there were a large university devoted to advancing the principles of Islam located in the United States and Newt had given the commencement address there yesterday instead of at Wingnut U., we'd be reading the following article an article about Newt's commencement address:

In a speech heavy with religious allusions but devoid of hints about his presidential ambitions, Gingrich drew applause from the graduates and their families in the school's 12,000-seat football stadium when he demanded: "This anti-religious bias must end."

"In hostility to American history, the radical secularists insist that religious belief is inherently divisive," Gingrich said, deriding what he called the "contorted logic" and "false principles" of advocates of secularism in American society.