1. Bush sure likes talking about somebody's kids being killed. That wasn't creepy at all.

2. Al Qaeda leader Osama bin Laden, who has eluded a U.S. manhunt, is plotting against the United States but has been isolated and driven into hiding, President George W. Bush said on Thursday.

"He's not out there traipsing around. He's not leading many parades," Bush told a news conference after being asked why bin Laden had not been caught. "He's not out feeding the hungry. He's isolated, trying to kill people to achieve his objective."

So, how many hungry people has Bush been feeding lately?

At least we know Jimmy Carter isn't actually Osama bin Laden. Not so much Dick Cheney.

But "leading many parades"?

That's right I forgot...the whole Grand Marshall thing and the theme of the 2001 Tournament of Roses Parade. 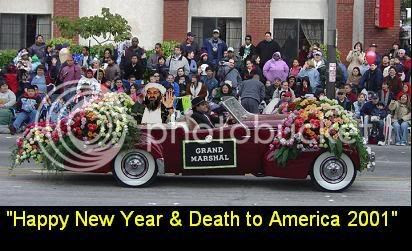 Original picture modified from here.
Posted by Attaturk at 4:55 AM