You've dealt with this moron for six years and now YOU feel betrayed?

The alliance between George Bush and Tony Blair is in danger after it was revealed that the Prime Minister believes the President has 'let him down badly' over the Middle East crisis.

The source said: "We all feel badly let down by Bush. We thought we had persuaded him to take the Israel-Palestine situation seriously, but we were wrong. How can anyone have faith in a man of such low intellect?"

Whose the bigger moron, the moron or the moron who follows the moron? 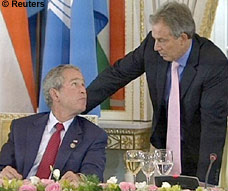