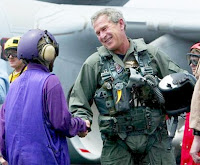 On the eve of the fourth anniversary of Commander Codpiece's prance across the deck of that aircraft carrier in his little flight suit costume, it seems as good a time as any to review some numbers:

7. Some of things the $564 billion in combined spending requests for Iraq could buy:

A college education - tuition, fees, room and board at a public university - for about half of the nation's 17 million high-school-age teenagers.

Pre-school for every 3- and 4-year-old in the country for the next eight years.

A year's stay in an assisted-living facility for about half of the 35 million Americans age 65 or older.

9. Number of my senators who voted for the Iraq war resolution: both of them (Clinton & Schumer).

10. Number of my senators who voted for the Iraq war resolution and who are running for president who will get my vote: none.
Posted by res ipsa loquitur at 7:03 PM