RADIO host Rush Limbaugh is far from conservative when it comes to his big appetite. The Post's Braden Keil reports that Limbaugh and a female companion lived large at Kobe Club last Thursday night, devouring bacon with truffles, Japanese strip steak, Kobe beef cheek ravioli, a large seafood platter, a combo of American, Australian and Japanese wagyu steaks and several "side" dishes. After finishing their $700 feast, Limbaugh left the server a $1,000 tip. On a previous night, Limbaugh and another female friend were spotted by patrons sharing a $4,000 bottle of wine at '21.'

Imagine the tip he had to give his "female companion" at the end of the night. I mean, one would think making nice with the both of Rush's inches must cost at least the GDP of a third-world nation.

Even then, it must take a lot of $4,000 bottles of wine before Rush's snausage has a happy ending. 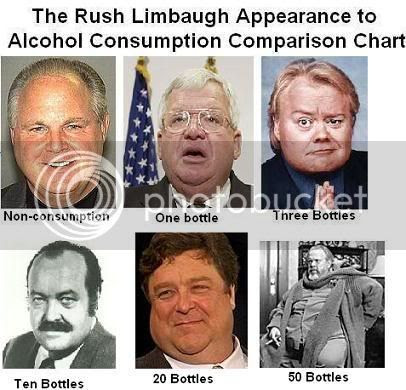