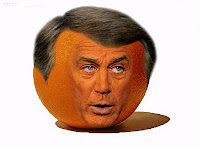 Not satisfied merely doing nothing to create jobs while violating many of their claimed morality laws by being Grover Nordquist ventriloquist dummies, the GOP-led House of Representatives passed the following yesterday:


A bill that would give the controlling party of either chamber of Congress veto power over any major new regulation passed the House of Representatives Wednesday. The measure, dubbed the Regulations From the Executive in Need of Scrutiny -- or REINS -- Act, would require Congress to sign off on any new rule estimated to cost more than $100 million. It passed 241 to 184, with a handful of Democrats crossing the aisle.

Other than possibly being unconstitutional, one does wonder where Congress would get the time to consider such regulations between fund-raisers and, well, fund-raisers.

Unless, of course, they were determined to make sure there are no regulations ever, creating a government that cannot possibly ever function.

...Oh, right. (pic via mikenitro94 at flickr.com) [cross-posted at Firedoglake]
Posted by Attaturk at 3:30 AM

I don't think there's any question that it would be. Regulations are the real-world implementation of law. If they don't conform to law, well, the courts get to decide that.

Second, giving one body of Congress the right to void regulation based on previously passed legislation is clearly giving that body a veto on existing legislation, which certainly violates the process laid out in the Constitution.

Last, it's the very definition of tyranny, in this case, of a minority.

It just goes to show what a bunch of evil fucks modern-day conservatives have evolved to be. If the American voter had any sense left, they'd chuck out every greedy, stupid fucker that voted for this steaming pile of shite.

The 112th Congress should have impeached itself long ago.

As I read it I thought of TPM's article describing a new ad from Democrats attacking Mittens in New Hampshire, and thought, "WTF for?" Stay away from Ritual Republican Seppuku!! They're doing a fine job all by themselves, so why run a money-wasting ad against someone who only has a 25% shot at the nomination, a year before the general election?

Better, and there is plenty of time, is to run ads attacking Conservatism, how they have been wrong about EVERYTHING the last 50-years from race, to economics, to foreign policy, to governing, to immigration, to Justice, to clean air, to schools, to etc., and the reason we are in this shit-hole they created.

I am not surprised by the blatant corruption (we have legalized it) of almost all aspects of our society. I also have no delusions that this can be reversed (the slippery slope is a slippery slope.)

To paraphrase the Dead: "We may be going to hell in a bucket, but at least we're enjoying the ride."

And Bowie: "Time takes a cigarette... You're a rock and roll suicide."

i guess anarchy IS a system. mad max was such a feel good movie.