"You ate all my Toblerones, I have no son!" 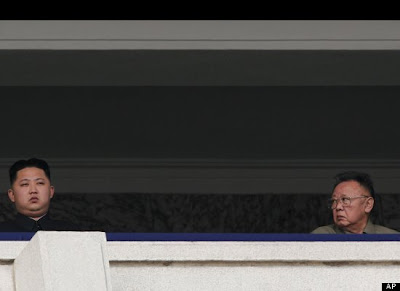 "Cry, let it out. Baste your chubby cheeks in tears of gravy."

... just as it is being taken off the air. On hiatus, they say. Which is a better fate than the other good show on NBC, "Prime Suspect," which is getting the axe. Okay, "good" is stretching it, but better than the hi tech medical science CSI clones that are taking all the "drama" slots in prime time. Between those and "House," the medical drama has veered off into some strange medical science fiction land. At least there's cable...

That looks suspiciously like a "now we're really fucked" look on Kim Jong-il's face. What does that say about un's half-brothers when Kim picks a 27-year-old hypertensive, diabetic alcoholic over them and makes him a general and supreme leader?

And, is he already having second thoughts? The Onion thinks so.

gravy is for eating, when made from scratch.

Any body want to start a pool on how long Kim Jong Pudge will last?