North Korea, perfecting the art of foot-stomping three-year old worthy temper tantrums. Yet to master the meaning of the word "irony".

"We cannot but regard Mrs Clinton as a funny lady as she likes to utter such rhetoric, unaware of the elementary etiquette in the international community," the spokesman said.

"Sometimes she looks like a primary schoolgirl and sometimes a pensioner going shopping."

Okay, first of all, Clinton gave North Korean far too much credit, a minimum of ten chronological years.

Your "fearless leader" looks like a cross-dressing Roy Orbison impersonator. 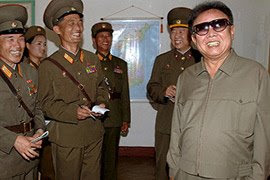 This is the kind of laughable projection you normally see only at National Review's The Corner.

Andy McCarthy, is a North Korean Secret Agent.
Posted by Attaturk at 7:08 AM