I wonder if the Weekly Standard is hiring

Because NY Times' television reporter/critic Alessandra Stanley's accuracy rate is ALMOST high enough to qualify. She's only a Fred Barnes column away from catching up to Michael Goldfarb.

In one, maybe 750 word column, the obit of Walter Cronkite -- a very well known figure who's impending death was known for literally months (plus he was in his 90s) the New York Times had to append her column a few days later will all of the following corrections -- many of which are common knowledge. Not knowing Martin Luther King was killed on April 4th? C'mon even Bono knew that one. Not knowing the Moon landing occurred on July 20th, when news of its 40th Anniversary was all over the fucking place? 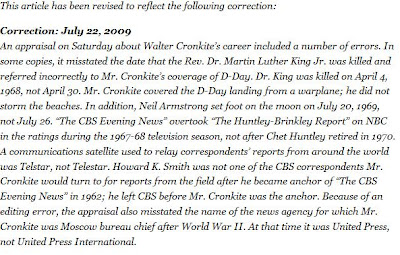 But then again, Alessandra Stanley has been well-known for not letting famous facts get in the way of whatever version of reality she wishes to toss out there -- and apparently she shares George Will's editors in some sort of NY Times/WaPO cost-savings arrangement.
Posted by Attaturk at 3:28 AM