Nobody could have anticipated watch...

Oh that abstinence only edu-mah-cay-shen!

The U.S. government has released the results of a new study that found dramatic increases in teen pregnancy, as well as instances of various sexually transmitted diseases, during the latter years of George W. Bush's presidency.

Researchers for the Centers for Disease Control found that instances of teen pregnancy rose in 2006 and 2007 after declining every year since 1991. They also found that diagnosed cases of chlamydia, gonorrhea, HPV and syphilis rose during the same time period. 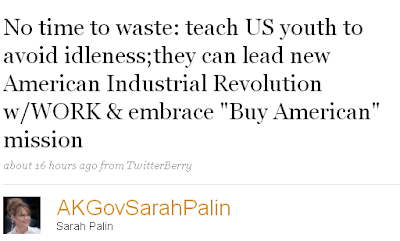 Because the greatest lesson you could teach America's youth on "embracing work" and avoiding idleness is quitting your job.

And like her abstinence program, Palin is all irony on buying "American". What kind of wheels does she drive around in?

Gov. Palin is proud of the many miles she’s put on her fire engine red VW Jetta diesel