The Continuing Adventures of Korean Jesus

And who is in his fan club:

This month, the Reverend Sun Myung Moon went to Washington to introduce As a Peace-Loving Global Citizen, his autobiography that, according to the Moon-owned Washington Times, "recounts the joys and challenges, the teachable moments and the monumental experiences of his life - much of it spent as a spiritual leader".

How many questions has Obama had about Jeremiah Wright (let alone any black person with an opinion)?

Yet, nobody in the media ever asks someone like Joe Lieberman why he, as an orthodox Jew, kisses the ass of a man who says he's the new Jesus? 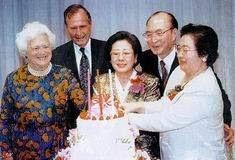