Makes you wonder if BiBi and Bolton's stache have gotten together for a cunning plan...

Stewart Nozette, 52, was arrested this afternoon at the Mayflower Hotel in downtown Washington by counterespionage agents from the FBI's on suspicion that he was meeting with agents from the Israeli intel group known as the Mossad...

...An 18-page FBI affidavit, signed by Special Agent Leslie G. Martell, says Nozette in January 2009 told a colleague "that if the United States government tried to put him in jail" on an unrelated matter, Nozette would move to Israel or another unidentified foreign country and "tell them everything" he knows.

And what does Nozette know?*

Nozette helped develop the lunar Mini-RF probe which recently helped confirm the presence of water on the moon. He's responsible for bombing the moon, folks! 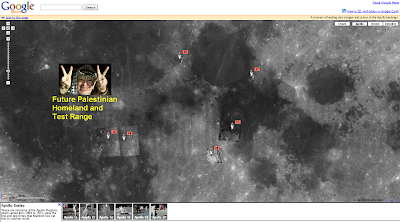 *in all seriousness he worked on stuff like SDI and missile defense also, which I guess was more the reason for any sellable info.
Posted by Attaturk at 6:43 AM