Mister, we could use somebody (somewhat) like Andrew Jackson again 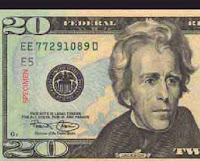 One of the best reads of my college years was Robert Remini's three-part biography of Andrew Jackson. There was a time that Andrew Jackson dominated American politics like no other. Until FDR he was the icon of the Democratic Party -- the reason there are all those "Jefferson-Jackson Dinners".

Of course, Jackson had gigantic faults. A slave-owner, a first-class racist (if there were more Asian-Americans then, he'd have had the racist trifecta), a gigantic hot-head, a scofflaw, and the first real "hater" we had in the White House -- he makes Nixon seem magnanimous.

But there was one thing that used to be considered a detriment that maybe, just maybe, he was ahead of the curve on. He hated big banks, and unlike modern Democrats he was damn willing to do something about it.

Maybe we should have a bit of Andy Jackson in our modern politicians rather than his ironic placement on a $20 bill.

In the United States, three banks hold almost 34% of the nation's deposits, four banks issue 50% of the country's mortgages, and the five largest credit card lenders control 74% of the market. These companies have a stranglehold on our wallets. And as we've seen, when they make bad decisions, they can take the whole economy down with them.

Rather than give the banking industry trillions without real consequences, Jackson at least would have threatened the leaders of Goldman sacks to a duel -- and he'd mean it.
Posted by Attaturk at 3:40 AM