Well, Jonah claims he got his book done. I got an early galley from the publisher and it has all the quality you'd expect from the Doughy Pantload. 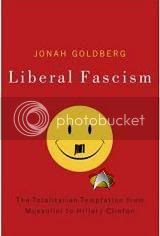 Stardate 1808.1: While traveling through the alpha-gamma-epsilon-nine quadrant of the delta sector of the galaxy we have come upon a planet of extra smelly people orbiting the star Clintonia. A Class M plant of smelly, dirty, hippies who call themselves Progressotopia. Using the authority vested in me by the United States of America Galactic-Freedom Avengers I have decided I and some of my crew will investigate.

"First officer Lowry, do you have the proper coordinates for our landing party?", I ask while adjusting my manly golden polyester shirt over my six-pack in anticipation of much alien pooty-tang.

"Yes, sir, logically one would think we are already victorious over the liberal-scum of this planet as we are armed with nuclear-tipped photon-torpedo launched phasers augmented with microwave radiation -- and they have only Toyota Prius's and scorn." My young vulcan science officer replies.

"Very good, Mr. Lowry. Perhaps after I display my manly virtues and implant my fertile and charismatic seed with the licentious liberal ladies of Progressotopia we can resume our awesome game of Risk in the halodeck. I shall avenge my loss of Siam through a surge out of Irkutsk."

I place my hands on my manly broad hips and soak in the glory that is the command of the galaxies finest, and most destructively awesome, ship. We are loaded with armaments, a deadly volcano, and the best Orange Julius in the known universe. "God, I'm awesome," I think to myself. And I pause, after all, it's true. And then it is time to announce the landing party.

"Derb, Lowry, Cliff May, Ramesh and Kate O'Beirne, you are with me on the away team. To the transporter room."

Just then, as I step across the bridge with my manly stride, I notice my communications officer, U-K-Lo, look at me in disappointment.

Before her disappointment harshes my virile mellow, I stride my buff body to the elevator. "Oh what adventurous alien delights await me on this trek, I wonder? Something stylishly shaved no doubt."

OR if you'd prefer, you can see it in the original Klingon in which Jonah wrote it.
Posted by Attaturk at 7:39 AM