Yeah, Popeye you and your Republicans had nothing to do with it 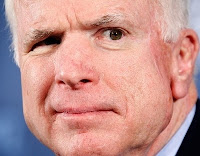 Project much, scratch that, ever fail to project EVER?!

Sen. John McCain (R-Ariz.) ripped into the president on Sunday for abandoning his pledge to foster bipartisanship in Washington, accusing Obama of creating a more toxic political environment than that which existed during the Clinton administration.

Obama's biggest failing in my book is giving you assholes concessions you don't deserve because you still don't vote for the legislation. You right-wing assholes are at least as culpable of ceding control of health care reform to Co-Presidents Nelson and Lieberman as Obama is.

In short, as ever, fuck you you god-damned imbecile.
Posted by Attaturk at 3:14 AM