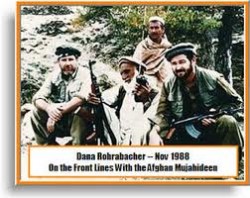 It's a race to the ample bottom:

Rep. Dana Rohrabacher (R-Calif.) told constituents over the weekend that climate change "is a total fraud" designed by liberals to create "global government." Now Rohrabacher wants to have a public debate where he would presumably be expected to present facts that could help him prove this statement.


Dana Rohrabacher...as right about climate change as he was about the Taliban.

The potential rise to power of the Taliban does not alarm Rohrabacher, because the Taliban could provide stability in an area where chaos was creating a real threat to the U.S. Rohrabacher says that under the previous situation Afghanistan was becoming a major source of drugs and a haven for terrorists “an anarchistic state of narco-terrorism.” In contrast, the Taliban leaders have already shown that they intend to establish a disciplined, moral society.


Rohrabacher calls the sensational media reporting of the “harsh” imposition of strict Islamic behavior, with the underlying implication that this somehow threatens the West, “nonsense.” He says the Taliban are devout traditionalists, not terrorists or revolutionaries, and, in contrast to the Iranians, they do not seem intent on exporting their beliefs.

Y'know, the more I hear of and from Rohrabacher, I get the feeling that he's only had one original thought in his life, and it scared him so badly, he hasn't gotten near another one ever since.

He does prove, however, that Texas has not cornered the market on stupid, despite the efforts of Looney Louie and Farenthold the Fogbound.

Taliban leaders have already shown that they intend to establish a disciplined, moral society...yes indeed...

the sun does incubate stupid.

He says the Taliban are devout traditionalists, not terrorists or revolutionaries, and, in contrast to the Iranians, they do not seem intent on exporting their beliefs.

Rorbacher continued: "Except, you know, from Pakistan where they started into Afghanistan. Or are those both the same country? You know what, I'm going to go with that."