President Pervez Musharraf is going to continue as Army Chief of Pakistan despite his pledge to give up the post by the end of 2004. Chimpy must be proud. We help bring about the very best of democracy, don't we? 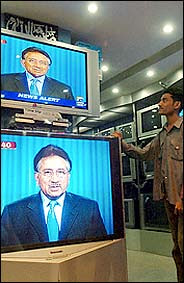 "Look at my tie... stare deeply into my tie, I am a democrat! We are all democrats!"

According to Mr. General:

"I have decided to retain both offices," he said. "In my view, any change in internal or external policies can be extremely dangerous for Pakistan."

He added that he was responding to "the voice of the majority."

And why must he continue to hold true accountability and democracy hostage? Well, for the same reasons that Chimpy is slowly peeling back our own democracy! Extremism!

Wearing civilian clothes during the speech, General Musharraf said he needed the power of his military position to fight Islamic extremism and to pursue peace with India. Responding to criticism from opposition leaders, he urged them not to use the decision to score political points and insisted that the move was not a step toward authoritarianism.

And how do we know that democracy will be preserved as it is being held an arms length away?

"Democracy will continue unhampered," he said. "The spirit of democracy has been restored in the country."

That's right because he told us so.
Posted by DeDurkheim at 11:16 AM