Peeking Behind the Curtain

Last night’s Tucker Carlson show -- isn't this the one that is going to be cancelled soon? -- was  hands down, without a doubt the singularly most disturbing discussion on race in American that I have ever seen on mainstream television and a clear indicator of how much the discussion has shifted to the far right.

The saving grace was a simply amazing moment when Bill Price, after racist comments, stepped up to the plate at the very end of the show and called Patrick Buchanan a white supremacist.  Wow! Did he just say that?  Yes, yes he did.  And how did the others on the program respond:  laughter.

In fact, the awkward laughter and silence was mind blowingly incredible and I really believe that Bill Price even surprised himself.  It caught me so off guard that I had to rewind it and watch it five times. 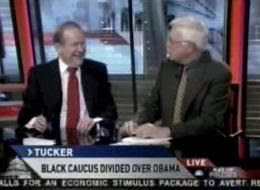 Luckily for all of us some on the job blogger -- Linkins -- over at the Huffington Post contingent caught it.  The key point in all of this is that if you watch the full segment that at no point does Buchanan ever deny the charge.

Pat Buchanon, white supremacist.  Hey, he himself does not even try to deny it.