A Seminar of Stupid

Bret Baier (can that possibly be his real name?) of FoxNews (naturally) got to spend some time with Dear Leader so the latter would stop talking about how horse thieves are really inspiring pastors.

We talked a lot about President Lincoln. And there’s going to be a lot of people out there who watch this hour and say, is he trying to equate himself with Lincoln?

I tell you what — he thinks about Lincoln and the tough times that he had during the Civil War. 600,000 dead. The country essentially hated him when he was leaving office.

And the President reflects on that. This is a President who is really reflecting on his place in history.

As Keith Olbermann said last night, if this is Bret Baier's understanding of history it's bad enough...if it is Bush's interpretation of history, we all be move to a different country this weekend.

Did John Wilkes Booth obtain sovereignty or something?

You know it's true at certain points Lincoln's popularity was not high, but that was certainly NOT the case in say November 1864 when he defeated George McClellan (the David Petraeus of his time). This was memorialized in those, what do you call 'em? ... oh yeah, historical facts: 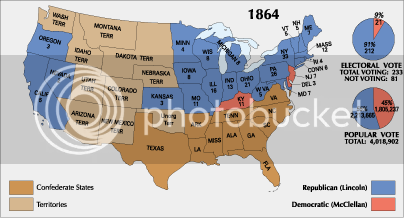 The 19th Century, a time when things were so different that they even changed red states into blue states...

Lincoln won the popular vote by 10% and the electoral college at a 10 to 1 rate -- that would be a landslide by modern measurements and something George Bush wouldn't recognize.

Of course, we could also get into the statement about when Lincoln left office, since Lincoln did not exactly go "voluntarily", and it occurred five months after the election and as the war was ending (Lee's surrender occurred five days prior). Lincoln plainly was at the peak of his popularity at the time of his death.

But Bret Baier and George Bush did very much LOVE "Our American Cousin" (it was about Methodist Missionaries right?).

Of course, I suppose if we want to define "country" the way many modern Republicans do... you know the kind of Republicans that used to be "Dixiecrats" (anachronistic states rights, racist Democrats like Strom Thurmond) I suppose they may have a "Country" in mind.

The Confederacy...which counted as a member Texas and Bret Baier's home of South Carolina.

These assholes really have to stop thinking they're Harry Turtledove.

Here's a pretty clear distinction between Bush & Lincoln (and there are literally hundreds of differences) summarized by Robert Kuttner when reviewing Doris Kearns Goodwin's Lincoln Bio, "Team of Rivals":

Lincoln's priority, always, was to preserve the Union and to reduce the sectional and ideological bitterness. As Goodwin brilliantly shows, he did so by the force of his personality and the generosity of his spirit. Lincoln had an unerring sense of when public opinion was ready for partial, then full abolition of slavery, and he would not move until he felt he had the people behind him. He governed by listening and persuading.

By contrast, Bush's entire presidency is about eking out narrow victories, not about building national consensus. Even when he prevails, Bush wins by manipulation and stealth. His legacy is deepened division and bitterness.

Bush is said to live in a bubble. His tiny inner circle protects him from realities that might upset him or challenge his dimly informed certitudes. Lincoln, by contrast, had the confidence to reach out to critics and seek out widely divergent viewpoints.