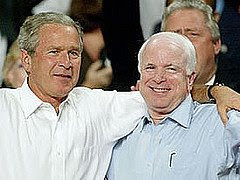 A few days ago at Firedoglake I put up some predictions of how al-Maliki's 'Great Basra Adventure' would go, some of them were:

1. Maliki will strut about like Bush on a caffeine bender. An Iraqi general here and there will be fired, as will random police officials.

2. Al Sadr will be as inscrutable as ever, hinting at belligerence while simultaneously extending olive branches (may not be a prediction as it is already happening).

3. Many more will die than initially reported. Not all that many will be from the Mahdi Army -- and those that do will be replaced easily and then some.

4. The Bush Administration will cheer anything that looks like shooting or blowing crap up. Chuckles Krauthammer will cry tears of joy and write it is time to bomb Iran.

5. There will be loud initial claims of victory by the Iraqi government and louder ones by Bush. These proclamations will at least last long enough to take us past the next round of Petraeus' testimony before Congress. After all, any one who dares question our impending awesomest victory over the evilizers ever is a two bit America-hatin',YouTube snippet preachin', hater!

Well some of these are arguably true, but to be honest even I'm rather amazed that this incursion has been blatantly and undeniably fucked up from the get go. Usually there's at least a period of a week or so where the bogus claims get tossed out before the truth becomes known. I thought at least the "fake news" period would last until after Petraeus testified. Now, I think the odds are higher he won't testify because "he'll be busy".

This time the disaster is before our eyes.

Witnesses in Basra said members of the most powerful militia in the city, the Mahdi Army, were setting up checkpoints and controlling traffic in many places ringing the central district controlled by some of the 30,000 Iraqi Army and police forces involved in the assault. Fighters were regularly attacking the government forces, then quickly retreating.

Senior members of several political parties said the operation, ordered by Prime Minister Nuri Kamal al-Maliki, had been poorly planned. The growing discontent adds a new level of complication to the American-led effort to demonstrate that the Iraqi government had made strides toward being able to operate a functioning country and keep the peace without thousands of American troops.

Mr. Maliki has staked his reputation on the success of the Basra assault, fulfilling a longstanding American desire for him to boldly take on militias.

But as criticism of the assault has risen, it has brought into question another American benchmark of progress in Iraq: political reconciliation.

How fabulous. And to think it has all cost only $3 trillion and tens, if not hundreds, of thousands dead.
Posted by Attaturk at 6:33 AM